Thanks to the folks at the Maker Lab at the Harold Washington library in downtown Chicago, I’ve now got a nice clean faceplate for the QST Forty-9er with DDS VFO that I built a few months back. Here’s the final result up front: 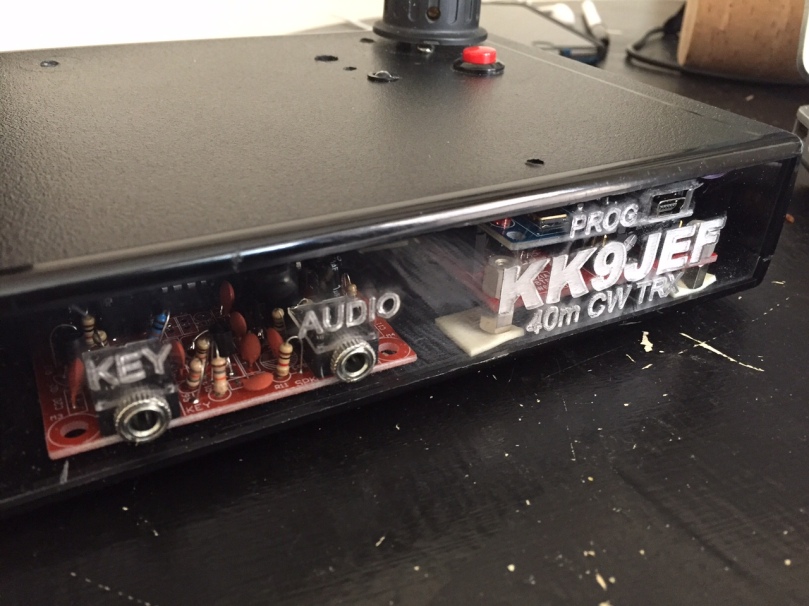 The panel is just a piece of clear 1/16″ plexiglass that the Maker Lab had on hand, which conveniently is the right width to slot into the grooves in the existing case. The hardest part of the design was taking accurate measurements of the positions of the three holes in the plate, for the Forty-9er’s key and audio lines and the Arduino Nano’s USB port. In truth, I mis-measured the hieght of the USB port, but switching to a slightly higher standoff and adhering the K2ZIA board down with adhesive pads, everything lined up fine.

The process of laying out the design for the laser cutter is very straightforward. The desired shape is simply laid out in Inkscape, a free photoshop-like program. If you use two colors in the image, you can differentiate between the lines to be vector cut (i.e. cut all the way through the material, for an outline or a hole) and the areas to be raster-engraved (lightly etched for a frosted appearance). You can even do vector engraving, where a clean line is cut partway through the material. I set up the machine to vector-cut the outline and holes, raster the letters, and lighting vector-engrave around the letters for extra readability. 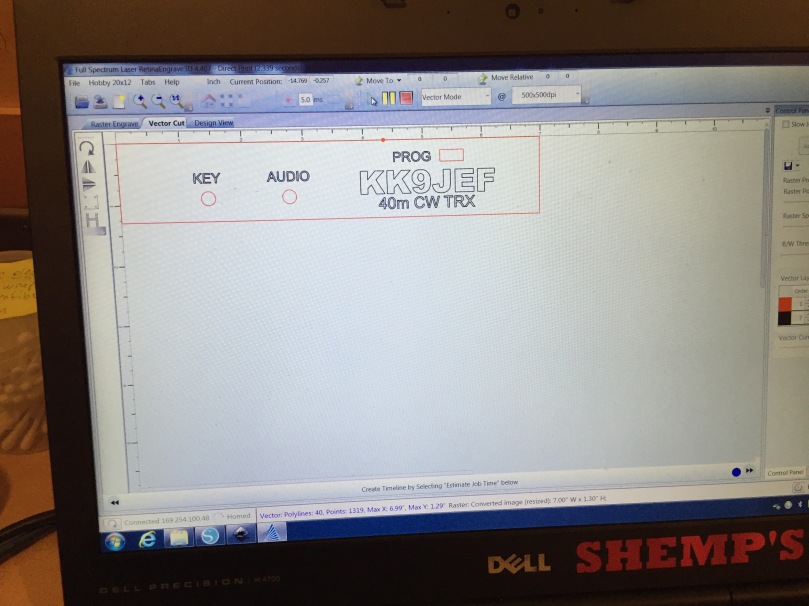 The laser cutting process has some trial and error in it; while the lab has some recommended settings, they’re more like guidelines than guaranteed routes to success. It took a couple tries to get the raster settings right to appropriately etch the plastic enough to be visible, without being too deep.

﻿
Thanks to the great staff and resources at the Maker Lab, I’ve now got a very presentable front on the rig, and for only a dollar!

One year ago today, I picked up an oscilloscope from Craigslist, wrote my first blog post, and officially decided to get myself back into amateur radio. And what a year it’s been!

In the last year, I have:

Here’s to another year on the air and at the bench!

Last weekend, I built a little morse-code keyer and a small set of iambic paddles. As I try to continue trying to improve my more code sending and reception, I’ve been running into the limits of what I can accomplish with a traditional straight key. The paddle not only allows for faster sending with perfect spacing, but the back-and-forth motion of he paddles is much easier on the wrist than the up-and-down pressing of the straight key.

While I was tempted to roll my own Arduino keyer code from scratch, the sheer number of features available in the K3NG Keyer Code made that a much simpler starting point. Frankly, I can’t think of any keyer-related function that the K3NG code doesn’t do, and I’m only actually using a small portion of its capabilities. I’m using it as a generic ultimatic-style keyer with sidetone and a potentiometer for speed control. Among the features left by the wayside (for now, at least) are:

Simplifying the K3NG circuit considerably left me with the following schematic:

The unit and its batteries are contained entirely within a 1-gang plastic junction box, an idea shameless stolen from an old W6KWF project. The power source from the project is just 4 AA batteries in series. The power switch for the unit is built into the potentiometer – pulling it out turns the unit on, pushing it in turns it off. The little 1.5″ speaker came from one of the old AM radios I pulled apart, I think. The remainder of the electronics are just point-to-point wired on a piece of perfboard, which rests on top of the battery pack.

I considered adding an power indicator LED, until I noticed that the power LED on the Arduino Pro Mini itself is clearly visibly through the plastic of the box. Looks nice! 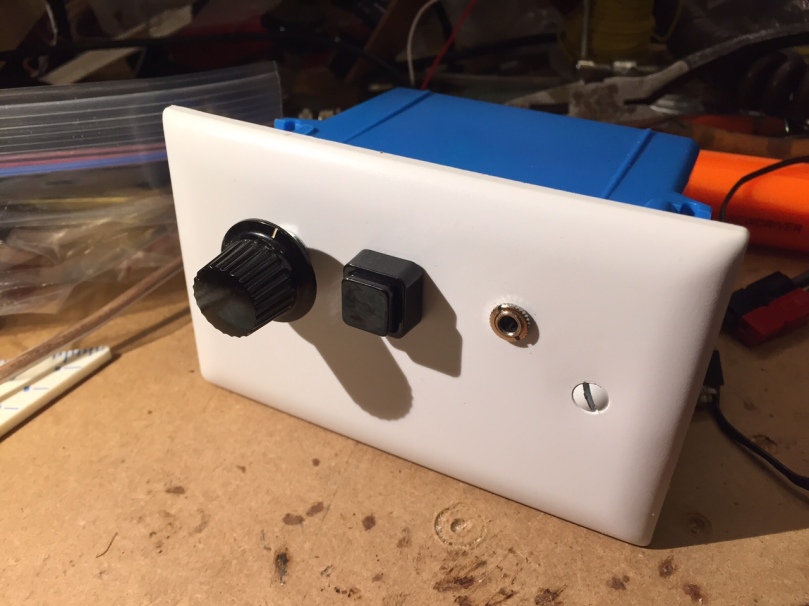 The speaker-enable pushbutton was a last-minute add, when I realized that I wouldn’t want to hear both sidetone from a rig and from the keyer. It’s just a SPST latching button. The K3NG software has an option for turning off the sidetone in software, but I opted for just a hard cut-out switch.

I’ve yet to make a contact with the new keyer, but it’s proved useful as a code-practice machine if nothing else. And it should be interoperable with any future radios that accept a straight key, so I think it’ll be a part of my shack to stay. I do wish there was a way to adjust the programming without pulling the box apart, but at only two screws, I think that bit of difficulty is a good trade for a cleaner presentation.

Of course, for the keyer to be useful, it needs a set of paddles to go with it. Mine took about an hour to make from start to finish. It’s just four pieces of scrap copper-clad glued and soldered together. Two pieces of single-sided copper clad, copper-side-in, form the paddles.  A 1/4″ bolt with two nylon lock-nuts forms the center-contact -rotating the upper lock-nut changes the spacing between the paddles and the contact, which allows for some adjustment in the feel of the paddles. A small raised piece of copper clad keeps the paddles elevated off of the base. The 1/8″ stereo cable is soldered to this last small piece of copper clad.

This actually works pretty well for such a quick project, though it became obvious pretty quickly that it needs some kind of base or strap to hold it steady when operating. That can be the next project.

About a month ago, I attended the Hamfester’s Hamfest in Peotone, IL, south of Chicago. Sponsored by the Hamfesters club out of Crestwood, IL, we had a lovely day for it, if only a little muggy.

Hamfester’s had the most vibrant flea-market area of any of the fests I’ve been to so far. No lack of boat-anchor rigs to be sure, but also some newer ones for sale (an FT817, A TS450, a couple ICOM base stations). Lots of CW keys, and no lack of miscellany, but the “clear out the shack properly” contingent was definitely in full swing. They’re the ones who have new and interesting things, or spare rigs they don’t need, or tools.

There are several sellers that I’ve seen two or three times now – I’d be willing to bet they acquired either surplus hardware or an estate-sale or two, and now just want to be rid of all the parts. There’s one table that I make a point of picking through. It’s literally just a giant pile, but I’d found a couple little treasures in there…

As I’ve previously mentioned, I didn’t come home with a huge haul from this swapmeet, but I did snag an unbuilt Scout Regen receiver kit that I put together. I also got a nice 30V adjustable, 500mA regulated current-limitted power supply from Elenco, in a nice case with leads, for 15 bucks. And a dual variable-cap from The Big Pile.

See you at the Fest!

This post is part of a series: Building the VK3YE Beach 40 DSB Transceiver.

The T/R switching for the Beach 40 is pretty straightforward.A single DPDT relay is controlled directly through the PTT  switch on the mic. Half of the relay switches the low pass filter connection between the transmit and receive sections. The other half routes power to the audio amplifier on receive and to the mic amp and RF amps on transmit.

Or it would be, it would have been straightforward if I hadn’t soldered the connections incorrectly twice. The first time, I turned the relay 180-degrees before soldering it down, so that the control voltage across the Normally Open pins, which obviously didn’t do anything. The second time, I reversed the coil and normally closed (receive) sections, so while I was able to test the receiver, the transmitter section would never get power.

But at long last, this section is complete. It’s a pretty adorable little relay, an NTE R40-11D2-12. It’s rated at 2A, which is way overkill for this project, but it’s what was available at Microcenter. The 12V coil voltage is driven directly from the battery input voltage.

It’s very satisfying to hold a mic in my hand for the first time on this rig, and hear the audio click in and out in the headphones when pressing the push-to-talk button. After a couple weeks away from this project, it feels like I’m closing in on completion.