Sunday morning I attended the Six Meter Club of Chicago’s annual hamfest in Wheton, IL. Much like my visit to them last year, it was a well attended, fairly well stocked event, with perhaps 4 or 5 dozen tables outside and the usual smattering of vendors indoors. I was a bit of a lazybird this morning and din’t get there till close to 9am, when the flea market folks were already making noises about packing up. Thankfully, most stuck around until after the 11am auction.

There were a number of tube testers at the fest today, both at the flea market and indoors. But the bell of the ball was an old Rocketest freestanding model that showed up at the auction. I think it went for $10 to a fellow who really just wanted the interesting nameplate. Sad to see it get parted out, but it really has reached the end of its time.

Speaking of the auction, that’s where I picked up most of my haul today. All in all, I can home with:

I haven’t been able to find an available online manual for the 72-475 sweep generator (just this datasheet for a similar model) but it seems to be a relatively straightforward device. The main dial selects between 0.0 and ~2.3 continously, and 7 range switches select between 1Hz, 10Hz, 100Hz, 1KHz 10KHz, 100KHz, and 1MHz multiplies. 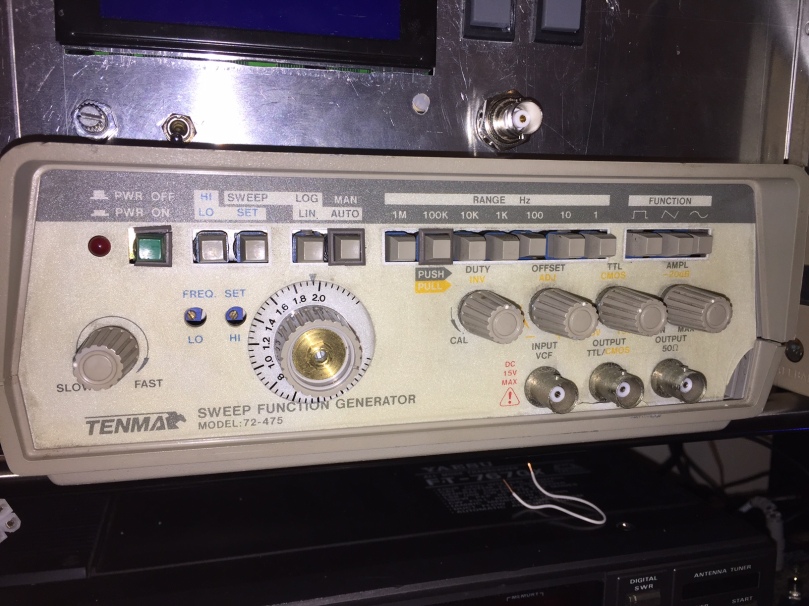 In manual mode, the device is simpler a function generator, with sine, sawtooth, and squarewave outputs. In swept mode, the device will sweep over about 3 decades below the selected range. So, for example, with the dial at “1.0” and the “1MHz” range selected, the automatic sweep will go from 1 Khz to 1 Mhz. It can sweep linearly over the range or logarithmic-ly, and total sweep time is adjustable from about 0.3 seconds to 15 seconds. There are also adjustments for the output amplitude, DC offset, and overall sweep time. In addition, a dedicated “TTL/CMOS” BNC jack is mounted next to the the main output for driving digital circuits.

As a preliminary smoke test (since I bought this thing as-is-no-test), and after verifying that the Power On LED lights (good sign!), I tried passing the signal through an old Vectronics 821 Super CW Filter that I got from another Hamfest. The 821 is a variable audio filter with a 750 Hz center frequency and selectable 180, 110, and 80 Hz filter ranges. Setting the sweep generator up to sweep from 1Hz to 1000Hz, the peak of the filter was audible, though not as pronounced as I would like. I feel this is a good smoke test of the sweep gen, and a questionable test on the filter. (Looking at the sweep into a 50-ohm load on an oscilloscope also showed promising behavior.)

The Oscillator Comparator is a nifty piece of kit from the 70’s, designed to allow a homebrewer or other ham to calibrate a frequency source against the (then-ubiquitous) 3.579 NTSC “Colorbust” frequency. The idea in broad strokes (outlined in a 1975 QST article rubber-banded to my purchase) is phase lock an internal 3.579 MHz VCXO to your input signal, which then generates a color-bar test pattern for viewing on a TV.. By connecting this signal to an analog TV’s Chroma input, if the derives 3.5795454… frequency exactly matches the colorburst frequency that the TV is receiving on one of it’s analog “Network” channels, the set of bars will not drift an its colors will be stable. If the VXCO frequency differents from 3.5795454 MHz (because your input signal is not exactly 2.5/5/10 MHz), the color bars will change in appearance over time.

The advantage of this somewhat cumbersome system of calibration is that the Colorburst frequencies embedded in network television signals would presumably be of very high precision. Probably from a Rubidium source or better, or possibly derived from another atomic source where possible. So the home experimenter would have access to this high-precision time-base “over the air,” as it were.

Interestingly, the manual notes that a perfectly-still color bar pattern does not, in fact, represent a perfectly calibrated signal. The networks, apparently, offset their Colorburst frequencies below the National Broadcasting System standards. Roughly 300 parts in 1010, to be specific, with some variation by network. Thus, a perfect 10Mhz signal, for example, should cause the rainbow color cycle to slowly change with a period of roughly 9.3 seconds.

It’s unclear from some quick investigation whether there are any NTSC signals still on the air in the states. All mainstream broadcasting has gone ATSC or other digial format, but it seems there may still be some low-power stations in major metropolitan areas still transmitting in NTSC. Being in the city limits of Chicago, I hope to find these signals, if they still exist.

Finally, one humorous note from the manual:

“In order to make meaningful use of the comparator, the user must be certain that the received T.V. signal is of network original. Since most of the daytime programs, especially the soap operas, are, this task is relatively simple.”

Hear you at the bench!